“I will remember the deeds of the Lord; yes I will remember your wonders of old. I will ponder all your work, and meditate on your mighty deeds. Your way, O God, is holy. What god is great like our God? You are the God who works wonders; you have made known your might among the peoples. You with your arm redeemed your people…” Psalm 77:11-15

Here at Global Encounters, we like to take some time each fall to reflect on how God moved through the mission teams that were sent out over the Spring and Summer. This year Global Encounters sent ten teams across five continents, and it was a privilege to see first hand how God is working across the globe. Here’s a small glimpse of what we saw happen…

The South East Asia trip was an opportunity to participate God’s kingdom work among people who have perhaps never heard of Jesus Christ. We had been asked to train young people to lead and teach other youth about the Lord. God really opened doors to disciple youth and share Jesus. There is often spiritual opposition, which means that God is gaining ground. The culture is predominantly Buddhist. We do training camps with the youth and children. We have watched the Lord Jesus change people’s lives and do wonderful things in answer to prayer. One quick story that stands out to me: It was the last night of a week-long youth camp and our host missionaries were dropping us off at our hotel. They had brought about 40 young people from their area, a six-hour drive, in one vehicle. It had been a great week of teaching and the Lord working in hearts. The wife turned to me and said that she felt prompted to share with me that while they were gone they found out that thieves had ransacked their house and stolen everything. I didn’t really know what to say, but her next words were, “And we praise the Lord!” She began to praise God and say how God had many more things to bless them with and this is just spiritual warfare which was proof that God had been doing a wonderful work over the past week. It was like she was holding this blank check from God with a promise that he was in charge and caring for all their needs as they confided in him. This what could be meant for evil, God meant for good and became an opportunity for his goodness to be manifested. That left a huge impact on me as we said goodbye to them that night, and revealed to me the power and goodness of God amidst suffering and darkness. “For we know that all things work together for the good of those who love God, to those who are the called according to his purpose (Romans 8:28).”  –Tim Forman

“You — teach me — English,” the girl said haltingly, pointing at me then herself to demonstrate the request.  She broke my heart as I realized in real time how this Indian girl saw English as her ticket to success and me as her way to learn it.  I couldn’t possibly have begun, beyond exchanging a few words before we had to move on.  I forget her name, and the names of most of the people I encountered on the other side of the globe in India.  But each of them had a unique story and I wanted to know it and be a part of it. Before I went to India the first time, I viewed it as a check-the-box-once visit.  And it is well worth that.  For the sideways head bobble, loosely resembling our “yes” nod but not exactly.  For saris, beautiful saris, worn by beautiful people.  For climbing rocky hills to catch first light of a new day.  An early jog past monkeys munching on spare mango and banana trash in the street.  Jostling with crowds where contact is the norm not the exception.  Lovely jasmine leis and traditional Indian dress generously provided by our friends.  Stares.  Brimming smiles.  Curry hot enough to make you cry, that you eat with your hands.  110’F peak temps during a heat wave, so hot that everything in the shade feels warm to touch and the ground almost burns your feet, cooling off to 92’F by dawn.  Games, stories, and activities with groups of over a hundred kids (and just seven Americans).  Being so far away from home — literally the opposite side of the globe — that the team is usually mistaken for Australians, British, or something else before anybody guesses our origin.  Drinking a gallon of water per day and still not needing to use the restroom till evening.  “SUPER!” universally and energetically whipped out for phones, clothes, skits, games, and nearly anything else deserving affirmation.  “SELFIE!”  Kids who run towards the camera, not away from it.  Interpreters showing us the way in a culture full of surprises.  Dinner at our favorite local restaurant.  Power outages at that restaurant (and everywhere else, often).  Church singing with no accompaniment other than a single drum, played with an impeccable sense of timing.  Dancing with the kids at a program hosted by one of our friends.  Dropping by an Indian wedding and getting pulled into the dance there too.  Weaving in and out of traffic — traffic meaning a the busiest melee of cars, tuk-tuks, motorcycles, buses, and water buffalo that could possibly fill a street.  Horns honking constantly, not in frustration but as a way of life.  Raucous Indian music.  Essentially staying on the left side of the road, or at least starting and returning there eventually, depending on the best use of space given time and circumstances.  Walking straight into that traffic to cross it, because they see you and avoid you, but won’t ever stop if you’re waiting to cross. This is India: energetic, assertive, raucous, hot, jostling, smart, scruffy, and beautiful.  And now that I’ve checked that box once, I want to go back there again and visit my friends. –Chris Schweickert

After working a crazy week of ministry with a group of kids almost double what was expected, losing and finding a stolen phone, learning through unexpected life circumstances the very lessons we were supposed to be teaching the children, and spending an exciting night in the hospital minutes before the plane ride home was supposed to take off, I’d say this team got pretty close. I think I can safely assume that one of the team’s favorite parts was hearing the stories of Jose and Matilda, our Ecuadorian hosts, who have been working in the Otovolo community for 50 years. Suffering beatings and having their possessions burned did not deter them from loving these people and translating the Bible into their language. They are just now starting to see the fruits of their labor. As I’m told, when the team came last year, they had over 100 people want to become followers of Christ. The response was unreal and caused some question as to its legitimacy. But through the excellent cultivation of our Ecuadorian hosts, the very same kids who didn’t know the answers to simple questions like “who is God?” and “what is sin?” last year, knew the answers this year. God certainly has been working in hearts, and it was incredible to be a witness to the harvest of decades. –Atalie Bale
Shares
Remembering His Faithfulness2017-09-302017-11-06https://files.globalencounter.com/wp-content/uploads/2017/02/gelogo-with-text-tagline-200.pngGlobal Encountershttps://files.globalencounter.com/wp-content/uploads/2017/09/oct.-remembering-1-1.jpg200px200px
Recent Posts 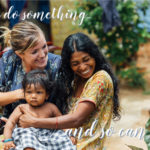 I Can Do Something…And So Can YouGE News 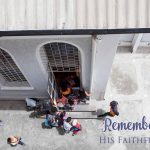