Friday. Wow…camp is starting tomorrow!?!? Where has the time gone??? It’s so hard to believe that our time here in Romania is almost finished. It’s a bittersweet time as we are all excited to see the kids coming to camp, and yet we’re sad because it’s almost time to go back to America. These past days have seriously just flown by! Could it be the whole snowball effect that happens when you get older? Or the fact that I’m not really sure what day it really is?

I guess the funniest thing that happened today was playing musical rooms (minus the music) when we got to camp since the person in charge wasn’t here, the people who were here had no idea where we were supposed to go and just told us to go to two empty rooms, and then after moving our stuff in the rooms, a family suddenly showed up for the group already here and needed a room so we got to move again! (Let’s just say that whoever it was on the team that had the bright idea to leave all the massive team bags downstairs is a genius.) But we did get some pretty good volleyball in tonight…and I got my yearly lesson. And bruises. I’m thinking the right side of my body has a magnet that attracts balls. Oh well…somebody has to be the comic relief, right?

I’m listening to the song Kings and Queens while I type this, and I just can’t help but think of all the kids I’ve played with, sang with, laughed with, and tried to talk with over the past days. Part of the lyrics say “if not us, who will be like Jesus to the least of these”. These kids are the least of these. The ones who are ignored and abused. The ones who soak up any kind of attention like a sponge. The ones who God has called me to be a link in His chain of love to. I may be the first link, the twelfth, or the hundredth link, but all the links lead to the love of Christ. I’m just a vessel to be used. No matter what the world says, my God DOES care about the least of these, and even though I can’t speak Romanian (yet), He takes my feeble efforts and uses them for His glory.  I’m rejoicing at the news that 12 kids and 1 adult became children of God this past week, even though I felt like a failure. I can’t wait to see what He will do this last week here in the beautiful country of Romania. 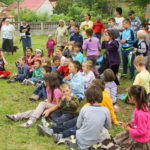 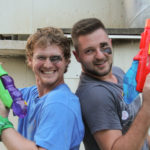