The day dawned bright and beautiful… And there was lots of work to be done… But after a weekend that included some time off and shopping, we were awake and ready to tackle it all. 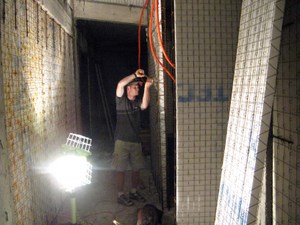 The Terrells are building an upstairs addition to their house, so there was plenty of work that needed to be done. Pete began to work on some of the electrical stuff, while some of the others cut and twisted wire for the walls. Downstairs in the apartment where we are staying some of the girls were un-calking windows, which had become moldy and needed to be redone. 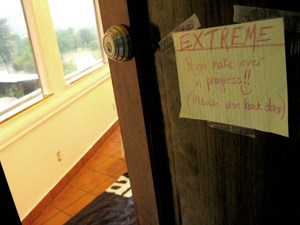 Meanwhile, on the main floor where the Terrells live, preparations were beginning for a living room makeover. Julie really wanted it painted… but I don’t think she was expecting it to happen so soon. But we loved the idea and ran with it, doing our best to make it a reality for them. So the room was emptied out, and a quick run to the store was made to buy some paint, a gift to Terrells from all of us on the team.

Somehow through all that, I got the really fun job (!!!) of spending the morning playing on the trampoline with the Terrell’s sweet girls, Cloe and Gabi. They have an incredible imagination, so the

morning flew by as we pretended to be princesses, trapped inside of a castle.

After lunch, we were ready to begin the painting in the living room! So both Amys, Rachel, and I grabbed some paintbrushes 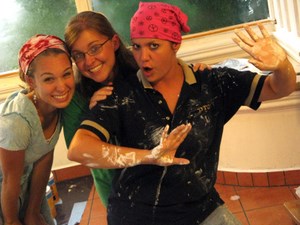 and began. We painted the room a mixture of white and light green which looked great!

We took a short break for dinner, and then we all resumed what we had been working on. We were given the choice to work late and sleep a little later tomorrow, or stop early, but get up early… It’s probably not too hard to guess which one we chose – working late. 🙂 But we ended up getting a lot accomplished and got two coats of paint on the living room.

One thing I found out though is that work is a LOT more fun when you’re really helping someone else, and doing it with a bunch of friends. 🙂 It was a tiring, but great day!

~Katie, for the team

Chloe with a paintbrush