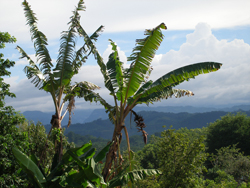 The world is filled with the wonders of God. You don’t have to travel far in order to see them, but when you do travel to far away places, you discover wonders that you never thought you would see in your wildest imagination. When you see them it simply fills you with awe at the creative handywork of God. He created this world so that it might tell of His power, His righteousness, and most importantly, His glory.

Today, the team was able to experience this wonder in a fresh and new way. We packed up and from our first stop in Ch’ol country and headed to our next destination of ministry in the jungle. However, on the way we stopped at one of the wonders of God that He created in Mexico – the falls of Agua Azul. Though it is visited by many tourists throughout the year, it seems to be tucked and hidden in the jungle out of site. The falls are absolutely gorgeous with aqua blue tinted water. 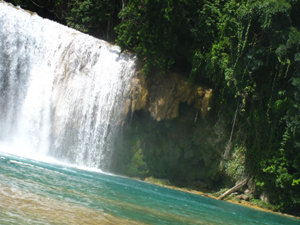 Unlike many falls which erode over time, this one keeps growing with time because of its high lime content, causing it to build the water fall as the water rushes over each day. We hiked into the jungle a little ways to follow the falls a bit farther up. After a refreshing dip in the cold water, and a ride down the rapids, we were off again to our next destination of ministry.

We arrived to the village, Tortuguero, late I might add, which is not uncommon when traveling in this country. The roads are very winding, and we had a trailer full of supplies so it took us longer than we thought (not to mention that we took a little longer at the swimming hole than we should have). But upon arrival, we began our children’s program in the village church and the guys began the unpacking of the supplies and tools. One of our goals was to install the shudders (the ones that we built in San Cristobal) in the jungle house of the local pastor Joel. However, when trying to back the truck and trailer down the hill to where we needed to unload the equipment, the trailer slid down in a ditch. Praise the Lord they were building a bridge across the river near by, and we where able to make use of their backhoe to pull us out. 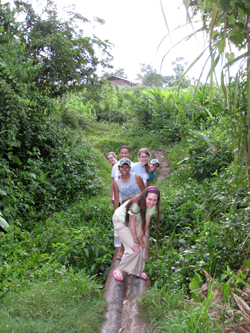 This is the trail up to Joel's house, which you can just barely see in the background.

Something that you have to realize is that the roads in these villages are very difficult to maneuver. Needless to say, we where not able to drive anywhere close to the jungle house where we would be working, so we had to carry all the tools, wood, and pre-built shudders through the jungle and up the hill to the house. It was an experience that is hard to explain unless you have done it. Picture a narrow path meandering through the jungle, heat and humidity, mud, bugs everywhere, huge undergrowth, carrying supplies over this muddy, buggy, steamy trail, yet somehow, it is the most awesome thing ever. The jungle experience is something that you just have to try, so my advice is to sign up for our next trek into to the jungle. You will not be sorry that you did. The wonders of God await you! 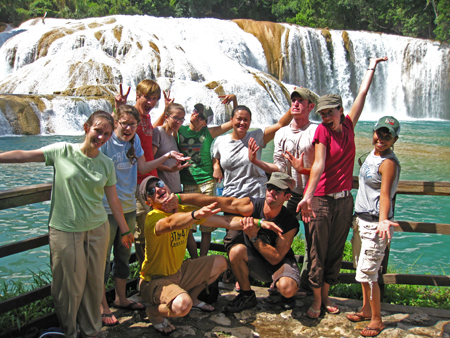 The team at Agua Azul 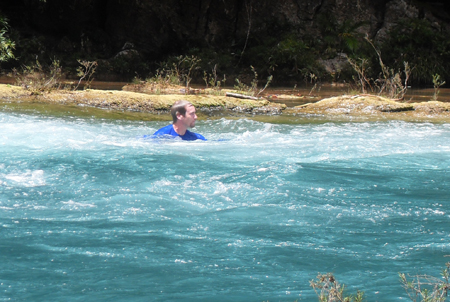 We had a blast swimming in this stunningly blue water. 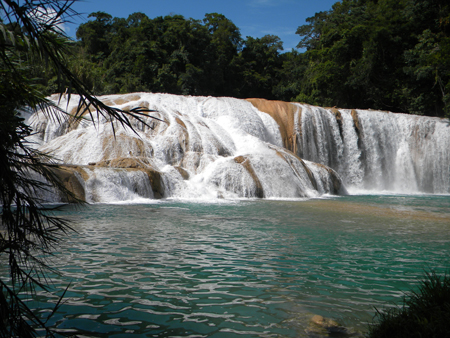 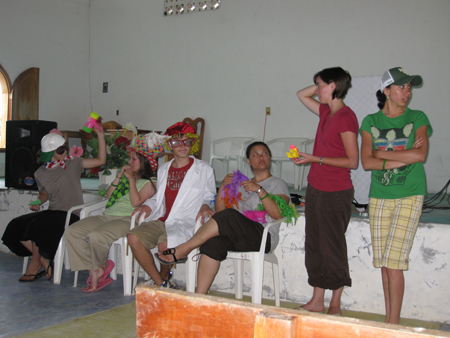 Another crazy skit crew teaches truthfulness to the kids of Tortuguero. 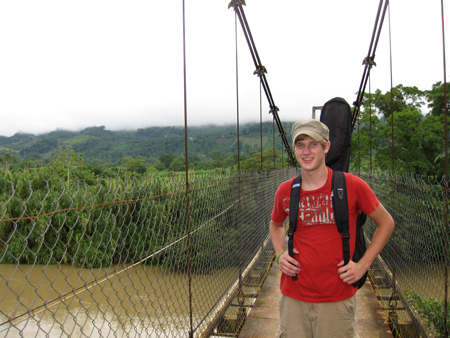 The foot bridge over the Tulija River. You can see why they are building a bigger bridge. 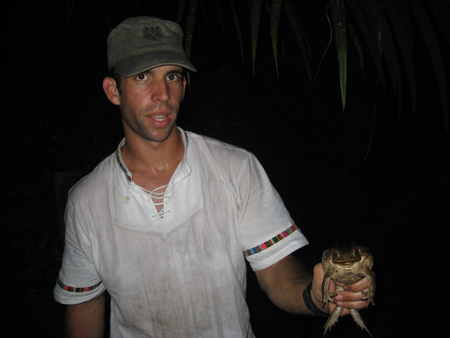 Steven found a poisonous frog. Isn't that cool? He assured us that it won't harm you until it puffs up and starts foaming. Ummm... Steven... it's puffing up! 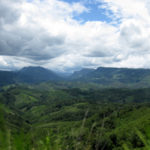 Back to the Jungle!2009 Chiapas 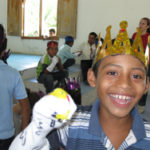