Imagine starting the day with a massage and ending it by watching a soccer game. Pretty incredible, right? This morning, several of the girls received massages from a professional masseuse who came to the hotel to serve and bless our team. If only every day could start that way! Not only that, the day ended as splendidly as it started, with soccer (but more on that later).

Following massages and devotions, the next thing on the agenda was teaching in a school. We split into small groups and taught truthfulness in a total of six different classrooms. Testimonies, stories and skits filled our time with the children.

In the evening, our team divided and went to our prospective churches to teach the final night of family conference number one and two. The team which I was on was working at an outdoor church. Our small group of about 30 children gathered in a shed to sing songs, learn Bible verses and hear more of Jesus and what it means to live for Him. More than anything, the children seemed to respond and open up to us through the love we showed them in the hugs and smiles we gave. Meanwhile, outside our little kid’s classroom and around a campfire, Tim, Dena and Brandy spoke with the youth of the King of kings. During brief moments between teaching the children, I would catch a glimpse of my friends ministering to these youth. The fragrance of Jesus permeated through them and it was obvious that the Lord was bringing about beautiful change in lives to the glory of His great name. The children, the youth, the men and the women there at the family conference all came with baggage, problems and hurts, but as we left them, we saw greater joy and freedom displayed on their faces. It was hard to leave, because we all loved them so dearly and they us. Hugs and Argentine kisses went all around. As our bus drove away, they sang to us their gratefulness and love. Their voices were the last memory experienced on that treasured evening. I will never forget it.

Finally, last of all, over a late Argentine meal, our team—along with new friends made in the country—gathered to watch a soccer game between Argentina and Brazil. It was intense and exciting, the cheers loud and heartfelt, and the game thrilling and competitive! In the end, it was a tie—0-0. Still, it was a great game to watch and a wonderful finish to an amazing day!

Tiffany, for the team

A crazy skit in one of the classrooms… Hockenstock strikes again!

Young people from Clamor in el Barrio with Tim, Dena, Brandy, and Carolina.

Crystal helping one of the little girls make a sock puppet.

And at the other church… Amy did her chalk drawing again…

…while Daniel preached the message on “My Heart, Christ’s Home.”

The teens at that church had such receptive hearts and hunger for the things of the Lord. Oh, and can you tell Daniel is recovering from pink eye? We forgot to take a picture when his eye was almost swollen shut. Bummer! 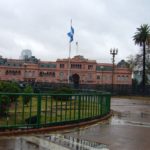