This morning God provided rain. Rain is an amazing thing that I only recently have come to appreciate. Now, I know you are thinking, “Dear, you live the northwest. Rain is a fact of life”. And well, it is. But just because I live in a rainy place doesn’t mean that I always appreciate rain . . . ..
We all got up very excited because for the first time all trip, we were going to do some serious site seeing and shopping!!! Yeah! Bus time was 9am. So we grabbed bags of croissants from the restaurant and took seats on the bus. ‘Is Pastor Salazar going with us?’ ‘I think he is inside having breakfast with his team’. Soon our bus driver got off and went inside. 30 min later Pastor comes on the bus. “There is no gas.” What is THAT supposed to mean? “With the economic crisis here in Argentina, the government is withhold gas from the gas stations and we cannot get gas in Buenos Aires.” Can we get gas here and then to go Buenos Aires? Do we have enough gas to travel to all the churches and everything tonight? Do we have enough gas to take Laura to the airport Monday night? What about Wednesday night when we all need to leave? All these questions are running through peoples’ heads and being asked. “You do not need to worry, you need to pray,” says Pastor as he heads off the bus. Ok, well, let’s pray. So we all prayed. And sat on the bus. You see, I think we were all so sleep deprived this trip that we would just sit on the bus whenever there was a time to wait. We must really really love our bus.
Waiting on the bus for another 45 min, Pastor again comes on the bus and says, “Let’s go.” Go where? What’s the deal? Well, in any foreign country, if you know the right people and have enough money, you can get whatever you want. The owner of the bus had some contact at the gas station and we filled up and were on our way . . . . at 11.
We arrived in Buenos Aires to very wet and cold weather. Something us people from the NW are quite adapted to, however, the Floridians are not quite used to such cold. Umbrellas were purchased, hoods put up, and heads went down and we attempted to site-see. Rather hard with your head down I may say. We walked and walked until I was quite turned around. Saw “The Pink House” (their version of the White House where their President stays. Their President is a woman so I guess a “pink house” makes sense.)

Outside the Pink House. Because of the political situation many protesters had trashed the square.

We also saw the widest street in the world. 10 lanes going one direction!

Nathaniel and Amanda at the monument downtown.

By then we were all quite famished. There was a restaurant having a nice special and room for all of us so in we tromped, after knocking over one of their statutes (ask David ☺).
A McDonalds with a McCafe inside was spotted and the group split after lunch. Some to get coffee and others to shop in a market type place. We were stopped by a friendly looking man who promptly told us that girls should keep their purses close, as there are many thieves about who would rob us blind. Also, this market was not the best place to shop as everything was overpriced. We thanked him for his advice, but due to lack of time, we had to settle for overpriced items. ☹ I got coffee so automatically my day brightened up. ☺
We were all supposed to meet at Florida St. at 4:30. Everyone finally arrived at 5. We all rushed to the bus, as there might have been a slight problem because we were late. However, the bus arrived just as we were crossing the street and we were able to jump right on. The Lord is good to us! We got to the hotel in just enough time to change for the evening and get back on the bus to go to our respective churches.
Our story for the children’s program was the “watermelon” story. Laura and I were assigned to go to JUMBO for laundry and melons. Retrieving laundry for 14 people can be quite the job. So we decided to get our other items first. Let me tell you, don’t let girls shop while they are hungry. We saw peanut butter and jelly . . .. . It just sounded SO AMAZING!!! So we got some. ☺ The way things are organized in foreign stores is very odd. We had the hardest time finding the bread . . .. Oh, of course. It’s in the center of the ice cream aisle. We should have known! 😛 Arriving in the produce section we discovered that JUMBO does not carry watermelon in the dead of winter . . . . What should we use? .. . A gourd? No, too hard to dig out. An apple? I don’t think it would handle being dug very well. An eggplant? Uh, no. Maybe a grapefruit. That might work. Sounds good, let’s do it. So we picked out the 4 best and biggest looking grapefruit and also some oranges and apples for the team. Then we had a thought ‘how are we going to spread our peanut butter and jelly without utensils?’ so then we commenced operation plastic knives. We never found them ☹. So we decided to improvise for later.
I stood in line while Laura went to get the laundry. The cart was quite full. Our bus driver, by now used to us crazy Americans, helped us load the clothes, peanut butter, jelly, Doritos, bread, apples, oranges, and grapefruits. In my broken Spanish I explained that we now needed to go to the first church and drop Laura off then to my church, the second one. Our bus driver is a very patient man.

I have never had so much fun telling a story in my life!! The grapefruits worked perfectly and the kids had NO CLUE!! It was hilarious!!

It is full of DIRT!!!
God was able to give me an idea of how to really work it in with the message we were trying to teach that night about truthfulness. What you are on the outside needs to match what’s on the inside. Jesus needs to be on the inside. We serve an amazing God.

Tired and now with clean clothes we all ate dinner and headed to bed. Sleep, sweet sleep. It is definitely a blessing from the Lord to be able to sleep. 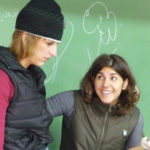